Exposure to two million more words a year could give a young child with hearing loss the information they need to reach their full potential.

Two million! That’s a big number. I mean, if I were to inherit two million dollars tomorrow, it would life changing for me.

But, is two million a life-changing number when we are talking about words?… more specifically, the number of words a child with a growing brain is able to hear.

It is well known that school-aged children benefit from using remote microphone systems, but researchers at Vanderbilt University recently wanted to find out whether preschool children could benefit from wearing a system at home.

What they found was simply incredible. Their findings showed that when preschool children used a Roger microphone system (RMS) in their homes, they had access to almost 5300 more words per day than when they wore hearing aids alone. I did the math. This essentially means that after one year of using Roger daily in the home, these preschoolers would have access to up to ~2 million more words!

Sounds impressive, but what does giving a child access to 2 million more words really mean for a young child’s growing brain?

If you read their article in the Journal of Speech, Language, and Hearing Research, they highlight important points:

Exposure to language is obviously important but do we know how many millions of words preschoolers need for success? …Yes, we do! 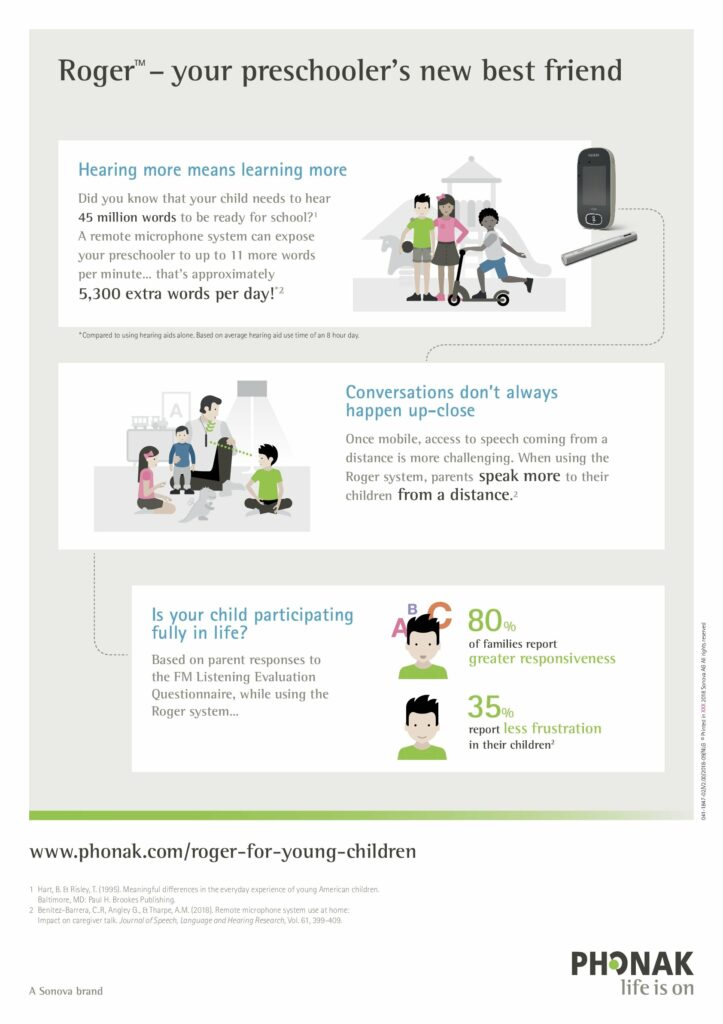 Hart and Risley (1995) conducted a landmark study that looked at the link between language exposure and child development. They found that normal hearing children who heard 45 million words by their fourth birthdays were better prepared when they entered school than their peers who came from language deprived environments. And when these same children were followed into third grade, they had bigger vocabularies, were stronger readers, and got higher test scores.1

More conversations from a distance

But, interestingly, the Vanderbilt researchers did not just find that children hear better with a RMS.

They also found that caregivers tend to talk more from a distance (>8ft) when using the RMS then when not.…What does this mean for children? Well, caregivers are likely providing a more natural exposure to language (more like they would talk with children who have normal hearing) when using a RMS. I suspect they would also have more confidence speaking from a distance because they know their children will hear them.

There’s even more good news! When given a questionnaire, caregivers perceived significant listening benefits in their children, especially in noisy environments and when talking from a distance. Families reported children were ‘quicker to respond’, ‘more attentive’ and ‘more tuned in’ when using the RMS.

How exciting! Hearing care professionals can offer all these listening benefits and increase a preschool child’s access to caregiver speech by up to 2 million a year, simply by recommending that a remote microphone system be used.

As a speech-language pathologist, I think this is news worth sharing! We know that millions of extra words count for our little ones. It’s the foundation they need for future learning and success.

And for HCPs, when parents come back to your hearing clinic reporting their child is ‘quicker to respond and more attentive’, you can feel confident that you’ve made a difference… knowing two million is indeed a life-changing number!