During the past 15 years as a cochlear implant user, I have consistently used a hearing aid on my non-implanted ear. Although my monosyllabic word identification score in my non-implanted ear is 0%, I still enjoyed many benefits from the use of acoustic stimulation to compliment the electric stimulation of the CI. These benefits are consistent with those cited in the literature including:

Additional benefits of bimodal hearing include improved speech understanding and enhanced localization abilities, although I personally have not observed these benefits. This is not surprising considering that people with CI’s or significant hearing losses in general are a very heterogenous group with large differences in performance.

Life before fitting formulae, a lot of trial and error

When I received my implant, there were no dedicated fitting formulae for bimodal CI/hearing aid patients. As an audiologist, I had the luxury of being able to fine tune my hearing aid in the non-implanted ear myself. The journey began with challenging the assumptions of the fitting formula. I asked myself what I hoped to achieve from fitting my non-implanted ear? Most fitting formulae operate on the assumption that we are trying to make as many speech sounds as possible audible to the person with hearing loss. This makes sense in most of cases. However, I noticed that the hearing aid was not adding very much to my speech perception abilities, particularly the perception of voiceless consonants. I began with adjusting by slowly reducing the high frequency response of the hearing until I could notice an actual difference.

One interesting benefit was that I could now go back to a hard plastic lucite mold instead of a soft silicon mold and still have no feedback. Personally, I find the Lucite to be more comfortable than soft molds. In addition, I found them easier to clean which lead to a significant reduction in otitis externa.

I also began adjusting the gain of the hearing aid. I noticed that I did not need as much gain for soft sounds. However, I did keep my gain for loud sounds pretty much the same, resulting in lower compression ratios. This also seemed to improve my music perception as well.

Several years after I was implanted, Phonak and Advanced Bionics worked together to create the Naída Link hearing aid. The goals of the Naída Link are twofold. First, it is designed to bring the benefits of Binaural Voice Stream Technology (BVST) to AB Naída CI users. Secondly, it incorporates the Adaptive Phonak Digital Bimodal fitting formula designed to align the frequency response, loudness growth and dynamic behavior of the Naída Link to the contralateral cochlear implant. See also Hans Mülder’s blog post for more details on this fitting formula.

How does the Bimodal formula compare?

When fitting the Naída Link using this specially designed fitting formula, audiologists will notice the frequency response to be quite different from the Adaptive Phonak Digital formula. What I was interested in examining was how does the Bimodal formula compare with the trial and error settings, obtained through many hours of fine tuning, that I created for myself?

Below (Figure 1) is a screen shot from Phonak Target fitting software showing the recommended settings using my audiogram and the regular APD fitting formula. As you can see, the formula attempts to make as much of the speech spectrum audible both through the frequency response and the use of SoundRecover frequency lowering technology.

The next screen shot (Figure 2) shows the response of the Naída Link using the Bimodal fitting formula. You can see how the formula attempts to compliment the CI rather than overlap. Specifically, it eliminates amplification of the high frequencies, which the cochlear implant does a superior job of making audible for the patient.

The final screen shot (Figure 3) shows the settings I made for myself on my Naída Q90 UP after many hours of fine tuning.

Examination of these two fittings revealed that the settings that I created for myself on the Naída Q90 UP are much closer to the Adaptive Phonak Digital Bimodal fitting formula than the regular fitting formula, specifically in terms of the frequency shaping. Second, I do use more gain than the Bimodal formula, however, this can be explained in part due to my RECD and to personal preferences. My RECD is quite small, as my ear canal response is only 1-2 dB more than a 2-cc coupler. Years of wearing tight fitting silicon ear molds seems to have stretched and enlarged my ears. Ideally, I should have made a more recent RECD measure and added these into the Phonak Target fitting software. The other is personal preference. I have always preferred more gain than any fitting formula prescribes.

In short, the Naída Link hearing aid is a logical option for bimodal CI users. It will provide appropriate gain to compliment the cochlear implant, without the need for trial and error over several sessions. Advanced Bionics Naída CI users can also enjoy the benefits of BVST, such as StereoZoom, ZoomControl, and DuoPhone.

More information on the benefits of Binaural Voice Stream Technology (BVST) to AB Naída CI can be found on the AB website. 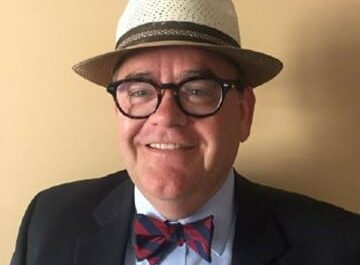 Trained as an audiologist, Peter is currently the Director of Pediatric and Power for Phonak Canada. He also wears a cochlear implant in one ear, a hearing aid in the other, and uses Phonak wireless microphone systems every day. Finally, he is an active musician playing bass guitar in various groups.

Dr. Carrie Spangler, Educational Audiologist, shares an update on her cochlear implant journey and helpful tips for you and your bimodal users.