If there is something that is considered ‘gospel’ in audiology, the thing that comes to mind for me is the belief in the field that stigma is an important factor that can influence patient decision making. Whether I’m speaking with people with good hearing, those with hearing loss, clinicians, researchers, or colleagues in industry, there is the belief that, at least for some individuals, (i) hearing loss and/or hearing aids threaten self-identity, (ii) hearing loss and/or hearing aids foster negative stereotypes about old age and disability, and (iii) stigma inhibits the adoption and successful use of hearing instruments.

So rather than relying on faith, what does the literature tend to say about the role of stigma in hearing loss and hearing aids? The first conclusion from the literature (for a recent review, see David & Werner, 2016) is that, indeed, there is some evidence to support beliefs (i-iii) stated above. However, methodological limitations constrain the ability to draw firm conclusions, particularly as it relates to point iii. Specifically, almost all of the work on stigma and its influence on hearing aid adoption and use has been retrospective in nature. As you probably recall from Research Methods 101, although such studies are relatively quick and inexpensive to conduct, retrospective studies are subject to numerous threats to validity (e.g., recall bias, social desirability effects, etc.). This is problematic because such threats limit interpretation and generalizability of the results, and rule out the ability to establish cause-and-effect relationships between variables.

Studies on stigma and hearing rehabilitation

To date, there have been exactly two studies that have tackled the topic of stigma and hearing aid adoption and/or hearing aid use employing a prospective research design, and the results from the two studies indicate some nuance regarding adoption and use. The first (Wallhagen, 2010) is a qualitative longitudinal study of 87 dyads that included at least one person seeking a hearing assessment and who had either never or not recently worn a hearing aid. Interviews were conducted at baseline, 3 months, and 12 months later. She found that themes centering on stigma (i.e., changes to self-identity, ageism, and vanity) emerged as influencing non-use of hearing instruments.

Where does this leave us?

Well, from my perspective, these results suggest that stigma may possibly act as a barrier to the adoption of hearing instruments, but that once a patient decides to try hearing aids, their successful usage may not be dependent on stigma.

The second conclusion from the literature on stigma and hearing is that there is not much work that has been done! Despite the importance of this topic, since 1982, there have been less than 25 academic publications that focus on stigma and hearing. Hence, we can conclude that there is still much to learn about the topic. Currently, the field needs to advance on a number of fronts. First, there are a lack of validated measures of stigma that are specific to audiology. Second, we currently have a poor understanding of the dimensions underpinning stigma. Does stigma stem from stigma related to age, disability, hearing devices, or all of the above? Third, there have been very few quantitative investigations of patients with hearing loss, and even fewer that employ a prospective research design. Fourth, and this is a point first raised by David and Werner (2016) – there is a lack of research in audiology on stigma that has approached the topic based on a theoretical framework. Finally, it is currently unclear to what extent self-stigmatization (i.e., shame and the expectation of discrimination from others) versus enacted stigma (i.e., the actual experience of unfair treatment by others) are relevant considerations for persons with hearing loss.

New research on its way

Moving forward, there is likely to be some new research discoveries on the topic of stigma in hearing rehabilitation released in the next year or so. First, Professors Kathy Pichora-Fuller, Alison Chasteen, and myself (University of Toronto) are currently investigating the extent to which self-reported negative views of aging and negative views of hearing aids influence hearing aid adoption in a large scale sample of patients with hearing loss who have no previous experience with hearing instruments. Second, the focus of the 2018 request for research proposals by the Hearing Industry Research Consortium was on the topic of stigma, and thus the field should likely see results from the laboratory of Professor Louise Hickson and colleagues (University of Queensland) who received research funding.

Finally, JP Gagné and colleagues (Université de Montréal) have recently developed (Vincent et al., 2017) two questionnaires (available in both English and French) investigating different sub-domains of stigma (the Hearing Loss Stigma (HLS) questionnaire and the Stigma Consciousness Questionnaire (SCQ)). Hence, it is anticipated that there is likely to be new research investigating the predicative capacity of these questionnaires in the near future. Stay tuned to this space for new developments.

We invite you to read a previous blog post by Dr. Stefan Launer on the importance of changing perceptions of hearing loss. 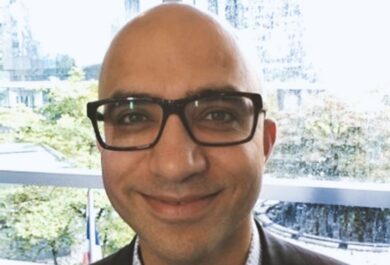 Gurjit, PhD, is a Senior Research Audiologist at Phonak AG, and Adjunct Professor at Ryerson University and at the University of Toronto. He is interested in factors that contribute to success with audiologic rehabilitation and the consequences of listening to signals that contain or evoke emotional responses.

By gaining a better understanding of hyperacusis, you can help reduce its impact and improve the well-being of your patients. Dr. Dany Pineault, Academic and Clinical Audiologist, shares what we know about this condition and how you can help.