I recently bumped into a colleague from Phonak HQ and after I raved about how Roger Select had changed my life compared to the Roger Pen, he suggested I share my experience on this Blog to give hearing care professionals insights into what this technology really does for those with hearing loss. Here it goes…

For the last 5 years, I used a Roger Pen via ComPilot II with my Audéo B hearing aids. It addressed my listening needs in noisy situations but it wasn’t always convenient to use. So, when I heard about the new Roger Select, I was excited to try out a protocol device to compare the user experience.

When I started to test Roger-ready Marvel hearing aids and was given a Roger Select, it was like my ears were transformed. The first days I felt like I was walking on air the whole time. It was like getting engaged or married, living with a constant need to shout it out to the world.  This transition was so huge for 2 reasons:

1. Roger Select uses MultiBeam Technology, which means I can put it on a table in a busy place and it only amplifies the target speaker, not everyone else. With the Roger Pen, since it was omnidirectional when lying on a table, I found there was often too much noise to understand properly, so I tried to use the other two modes (pointing or handing it to the talking person).

In my experience, I always felt a little bit awkward pointing at people, especially when meeting for the first time. And when I tried handing the Roger Pen to people during group conversations, I had other issues. For example, if everybody tried to make it right and the pen was passed between every talker, it created an artificially delayed conversation. Then if people didn’t care to use it or simply forgot to pass on the Pen, I was missing out. Plus, many people enjoy gesturing a lot when they speak which means that the Pen was waved through the air. It’s so difficult for excited gesturers to change their talking style – I know that, because I am one myself. With Roger Select, I no longer have to worry about awkward moments or modifying the behaviors of others. Roger Select can be placed on the table and automatically adjusts the beam to wherever I need it. No overwhelming noise, no delay, just a clear conversation.

2. Marvel has a listening program configured for Roger which allows to set a fixed directionality. This kind of listening program was previously introduced with Naida B, hence it’s not new, but with ComPilot II and Audéo B, it wasn’t available. In the streaming programs for ComPilot II, you can choose between an omnidirectional mic setting or muted mic. When using Roger Pen, I usually went for the muted mic, because with an omnidirectional mic setting, the background noise would be overwhelming.

However, this resulted in a very artificial and somehow blurred overall sound quality, plus I needed to toggle out of the streaming program to pick up sounds that weren’t in the range of the Roger Pen. Now, with fixed directionality, I can leave the mic unmuted and still enjoy a very clear conversation. Environmental cues are preserved and I feel like a part of the scene, not a disabled observer.

Days of struggling are over

The first time I realized how comfortable I was because of Roger Select and the new listening program was when sitting in a busy restaurant. I was so amazed, I couldn’t stop smiling. I have had a hereditary hearing loss all my life, so I am used to striving and struggling. However, my anxiety about going out in noisy places was gone within a blink. Just a few months before, I was tired of trying to keep up with conversations in noisy places, sometimes even faking it, and often ending up very exhausted after going out. At a certain point, I had stopped going out as much as I used to. Now, I am looking forward to the next meeting instead of worrying about how exhausted I will be afterwards.

When I was recently asked by friends to meet at a coffee shop to discuss a rather difficult topic, I didn’t have to think twice. Not a long time ago, I would have insisted on meeting at home or in a quiet place. These days, I just say ‘yes’ and pack my Roger Select, ready to go! Roger Select literally gets the conversation started. I love when people ask me what the cute UFO in the middle of the table is about!

Find out more about Roger Select on the Phonak website. And, to learn more about other Roger products, we invite you to read a previous blog post by Jacqueline Drexler, ‘How do you choose the right Roger Solution?’ 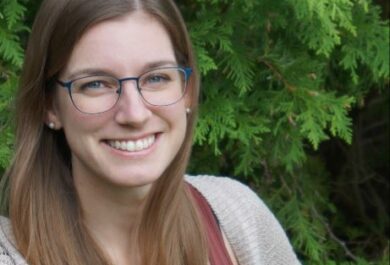