Last month, we interviewed Julia Sarant, PhD, regarding the latest research in the area of hearing loss and cognition. Since that time, an article in the Journal of Clinical Medicine by Dr. Sarant and her colleagues at the University of Melbourne was published.

In this ongoing study, cognition is assessed before hearing aid fitting and at 18 month intervals thereafter using card games played on a laptop computer. Other factors likely to influence cognition, including social participation, genetic risk, loneliness, quality of life, mood, diet, physical activity, and hearing aid use and benefit are being assessed.

Key findings of the study are:

1.       After 18 months of hearing aid use, over 97% of participants showed either clinically significant improvement or stability in executive function.

3.       More frequent use of hearing aids was associated with significantly greater improvements in cognitive function.

Below is a follow-up article by Dr. Sarant in which she takes a closer look at the key takeaways of the study.

As one of the researchers in the study, my main motivation is the desire to make a positive difference to the lives of people with hearing loss. It has been 4 years now since I designed the study in 2016, found an industry partner (Sonova) who was as interested as I was to see whether hearing aid use could change cognition, got together a team of dedicated and knowledgeable interdisciplinary researchers and clinicians, and began the study. An important part of being a researcher in this field is having the patience to work and wait for several years before finding out what the results of all that effort are. When the statistical analysis of our first 18-month review results was being conducted, I was nervous, but then was very excited when we saw what the results actually were. I had hoped that hearing aid use could stabilize cognitive function, but was somewhat astonished to see that, at least for this initial group of people, this had actually significantly improved.

Despite the effectiveness of hearing aids as a treatment of hearing loss, it is estimated that up to 76% of people who need hearing aids do not own them.1 Of the very small number of people who do own hearing aids, a recent report showed that at least 24% do not use them.2 However, given the recent identification of hearing loss as a modifiable risk factor for dementia (estimated to contribute 9% to the risk of incident dementia) the results of this study may encourage a greater number of people to use hearing aids in the future, not only to improve their hearing and quality of life, but also as a means of helping to maintain their cognitive function.

In summary, these initial results suggest that instead of declining, cognitive function in older adults with hearing loss who use hearing aids can not only remain stable, but can also improve significantly over time. These results suggest that the treatment of hearing loss with hearing aids may delay cognitive decline. Hearing aid use could be a very safe and economical way to preserve cognitive function and improve quality of life for longer for older adults.

It is important for people with hearing loss to consider the potential impact of this on their cognitive function. For people with mild, moderate and severe hearing loss, the dementia risk is either doubled, three times greater or five times greater respectively. It is very important for health care practitioners to communicate this information to their clients. Interestingly, the average hearing loss for participants in the Sarant et al study was only mild, yet despite this there was significant improvement in cognitive function with hearing aid use.

Again, this information should be communicated to clients by their healthcare practitioners, as this gives clients with hearing loss the choice to maintain a better quality of life through wearing hearing aids to aid not only their communication, social interaction and environmental awareness/safety but also their cognitive function.

Although there are successful treatments for hearing loss, there is currently no successful treatment for cognitive decline or dementia. This research is a significant and positive step in investigating the effect of treatment of hearing aids to delay cognitive decline. I am very excited by these initial results and expect that as we follow more participants in the study over a longer period of time, we will continue to see a significant and positive effect of hearing aid use on cognition. If this is the case, we will have an effective and relatively economical method of delaying cognitive decline for many older adults. This will give many people around the world the opportunity to enjoy living longer free of dementia. However, further follow up is required with larger numbers of people to confirm these results.

The study will continue to recruit participants and investigate cognitive outcomes of hearing aid use over a longer time period to confirm whether the improvements and or/stability in cognition observed to date are maintained and/or extended beyond 18 months of hearing aid use. We will also be comparing the cognitive outcomes of a larger sample size of our participants with those of a healthy aging comparison group of older adults with typical hearing for their age, which will include people with normal hearing and people who are both treated and untreated for hearing loss.

It is important for audiologists to communicate these new research findings to their clients, and in particular the fact that hearing aid use may positively impact their cognitive function and could prevent cognitive decline. It is important that clients are in a position to make fully informed decisions based on up-to-date information about the management of their hearing and cognitive health.

We invite you to read Dr. Sarant’s recent Theory to Practice interview on this same topic. 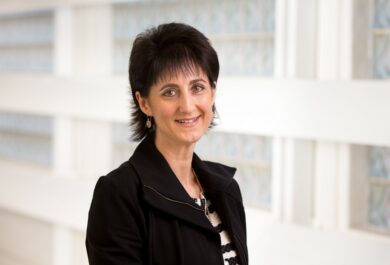 Associate Professor at the University of Melbourne

Julia Sarant has been conducting clinical research with adults and children with hearing loss for 30 years. Julia’s research program is exploring co-morbidities of hearing loss, and the benefits of hearing instruments on cognition and well-being.

Are you interested in the latest research investigating the link between hearing health and general well-being?  Now you can find a collection of relevant articles in one place. Here is a sneak peak of what you’ll find.